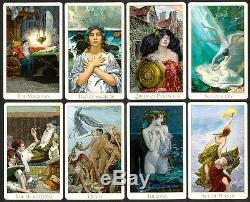 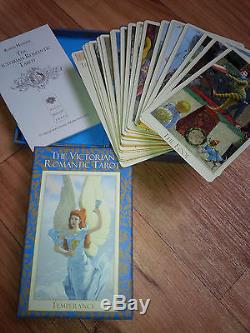 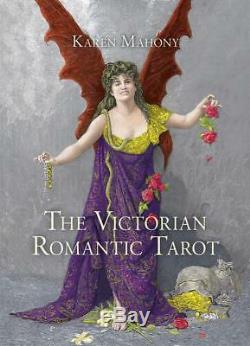 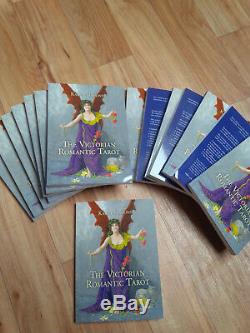 This is the an authentic VICTORIAN ROMANTIC DECK signed and manufactured by authors Alex Ukolov & Karen Mahony so a genuine collector item of this rare deck. It's been out of print for several years now.

I have just TWO remaining decks once they're gone that's it!! I will also include a FREE signed copy of the. T hird edition of the Victorian Romantic Tarot Book 2018 edition By Karen Mahony Signed by both Karen Mahony & Alex Ukolov {I never show the signature online as people have been known to copy the image, transfer onto their own books and sell} This edition of the companion book is; 214 pages long includes 2 new cards all images of cards are in colour. Descriptions for the new cards have been re-written to reflect any changes short notes about the new images have also been added, just to give some background.

For those who have long waited for the Victorian Romantic book to return, it's better than ever and in colour but. Item details of the Deck.

79 cards (78 tarot with one extra). Based on the RWS standard tarot system. Includes a clear instruction booklet. Image three shows the last two remaining decks - one is opened showing the booklet and gold edged cards, the second is in the front closed.

You are purchasing ONE of the decks shown, which are the only two left in print. This deck sells on another online store as a USED unsigned item today {27 May 2017}for.

So understand the market value of this product and that I'm still asking less than those prices for an AUTHENTIC, RARE & SIGNED 2012 edition. Lavishly illustrated capture the romance of the Victorian era, base don antique engravings many of which are now rare.

This deck offers an evocative period atmosphere and rich opportunities for story telling. People ask why this deck is NOT cellophane wrapped as though this is a flaw, which it is not. Karen Mahony Sent: Friday, 19 February 2016 20:53 To: Solari UK Subject: Re: Victorian Romantic decks- cellophane wrapped? Hi Natasha, We open all decks to check them before sending out which is why they aren't cello-wrapped. This is unusual, but we did it because we had some print issues with the deck and so we checked everything.

We also of course had to open to sign. We have no immediate plans to reprint the companion book, but eventually hope to do so. It is very unlikely to happen in 2016 as we are moving home and office this spring and that will take up a lot of time. I hope this puts to rest any queries about the lack of cellophane wrapping or the fact that the decks are individually checked by the authors as part of their quality control. I do not offer additional photos of the signatures of Karen & Alex to avoid counterfeit copying of this item which is an authentic signed deck so please note that.

We may reprint in a year or two, but this is not yet certain. We do have the Russian deck in stock, but I would need to check how many - we are probably down to the last three or four. Thanks again for your interest.

This item is in the category "Collectables\Religion & Spirituality\Spirituality". The seller is "solariuk1997" and is located in London. This item can be shipped worldwide.