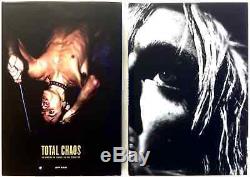 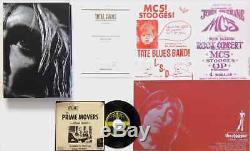 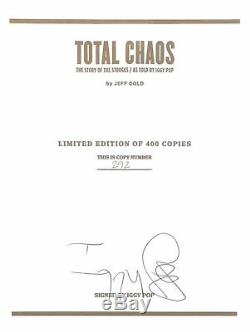 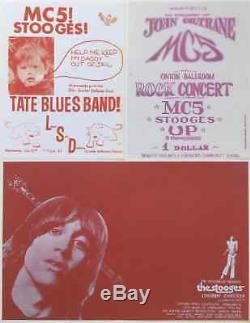 Total Chaos: The Story of The Stooges/As Told By Iggy Pop. Signed by Iggy Pop and author Jeff Gold.

Only 400 copies of the limited edition version were produced; each including. A letterpress numbered certificate, signed by Iggy Pop. An exclusive picture-sleeve vinyl single of Iggys first band The Prime Movers, featuring Iggy singing Im a Man (never issued on vinyl, on the highly collectible Third Man label).

This copy has the standard black and white book cover (Approximately 250 of the 400 had a special Gold Metallic printed cover; we have a few of these more expensive copies available on our website). Total Chaos is the story of the band that invented Punk, as told by Iggy Pop. 350 pages long, with 220 rare photographs, documents, and artifacts, it includes contributions from Stooges super-fans Jack White, Dave Grohl, Josh Homme, Joan Jett and Johnny Marr. Mojo magazine raved Gasp at the awe inspiring memorabilia and frank talk in. While Esquire called it A fantastic new booka must read for both diehard fans and anyone who wants to learn first-hand from Pop what it was like from the inside looking out in one of the seminal bands of the post-60s era.

Is phenomenala must have for all fans of the group. The final photo shows the book with its full color dust jacket on, and removed. Only one copy of the book is included.

Recordmecca's clients include the Smithsonian Institution, the Rock and Roll Hall of Fame, the Experience Music Project, the Country Music Hall of Fame, and the Victoria & Albert Museum. Recordmecca's Jeff Gold was named by Rolling Stone as one of 5 Top Collectors of High-End Music Memorabilia. He authenticated previously unknown Bob Dylan manuscripts for PBS's History Detectives, appeared as a featured appraiser on VH1's Rock Collectors, and has been profiled as a top dealer and collector in the books Vinyl Junkies and Retromania: Pop Culture's Addiction to it's Own Past. Gold is author of the acclaimed books Total Chaos: The Story of The Stooges/As Told By Iggy Pop; and 101 Essential Rock Records: The Golden Age of Vinyl a survey of seminal rock albums, featuring contributions from David Bowie, Iggy Pop, Johnny Marr and Graham Nash. Check our feedback; you'll see that we are dedicated to providing superior customer service and follow through. We guarantee everything we sell to be authentic with no time limit. The item "THE STOOGES / IGGY POP Total Chaos SIGNED LTD. EDITION BOOK With45, Poster, More" is in sale since Thursday, December 27, 2018.

This item is in the category "Entertainment Memorabilia\Music Memorabilia\Rock & Pop\Artists P\Pop, Iggy". The seller is "recordmecca" and is located in Venice, California. This item can be shipped worldwide.