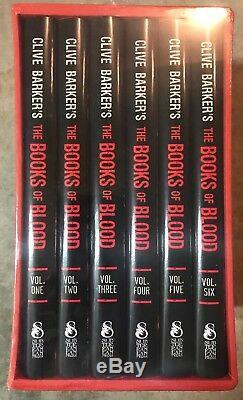 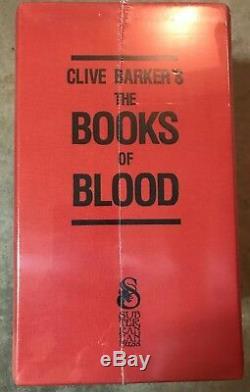 The Books of Blood Signed Limited Edition Subterranean Press Clive Barker. In perfect, unopened, unread condition. Dust jacket illustrations by Clive Barker. Note: There is a limit of one Signed, Limited Edition set per customer, household, or plane of existance. If you have already bought a set, you're not eligibe to order another. When the first three volumes of The Books of Blood appeared in 1984, it was immediately apparent that a writer of extraordinary, perhaps unprecedented gifts had emerged, seemingly out of nowhere. The publication, one year later, of the final three volumes merely strengthened that initial impression. Now, some thirty years after their initial release, The Books of Blood has assumed the status of an undisputed classic.

The dead have highways, Barker tells us in the frame tale that begins this collection. He then proceeds to take us on a tour of some of those hidden highways. The tour begins with The Midnight Meat Train, one of the most extraordinary urban horror stories ever written, and ends with the novella The Last Illusion, the basis for Barkers 1995 film, Lord of Illusions.

In between these narrative bookends, Barker offers us a series of unforgettable images. In The Body Politic, a pair of severed hands leads a revolution unlike any you have ever imagined. Son of Celluloid features a sentient tumor that comes to astonishing life in a nearly deserted cinema.

In the World Fantasy Award-winning Jacqueline Ess: Her Will and Testament, a bored and suicidal housewife discovers a lethal capacity to transform the human body. The Yattering and Jack presents a comic tour-de-force about the relationship between a minor demon and the man he so unsuccessfully haunts.

The Forbidden, which inspired the classic horror film Candyman, concerns a graduate student who uncovers the grim secret hidden in a rundown housing project. And in the masterful Rawhead Rex, a giant, blatantly phallic entity terrorizes a rural English community. These are just a few of the extravagant pleasures waiting within these pages. The result is a gigantic treasure trove of unique, often darkly beautiful visions. These visions are accompanied, fittingly enough, by the authors own original artwork, which serves as the perfect complement to these singularand immensely entertainingcreations.

As disturbing and compelling as they were three decades ago, the stories and novellas gathered here are among the preeminent achievements of late 20th century horror fiction. These are narratives that are built to last. No one who encounters them is ever likely to forget their impact. Limited: 500 numbered six-volume sets, with the first volume signed by the author, housed in a custom slipcase.

The item "The Books of Blood Signed Limited Edition Subterranean Press Clive Barker New" is in sale since Saturday, February 2, 2019. This item is in the category "Books\Fiction & Literature".