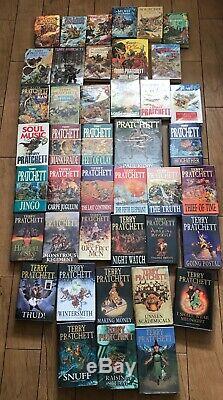 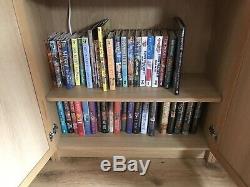 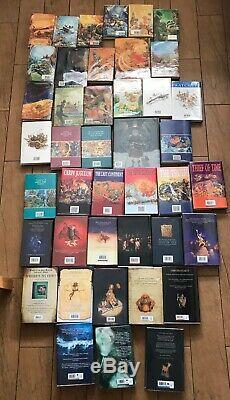 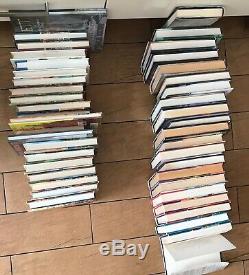 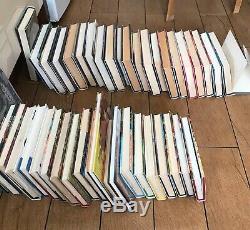 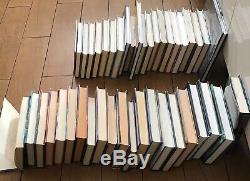 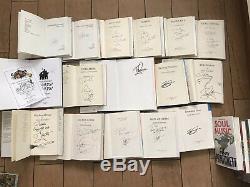 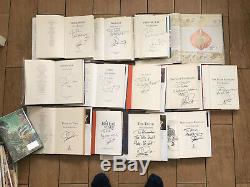 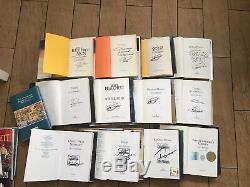 All without inscriptions except Faust Eric. Only Moving pictures with priced clipped dust jacket. 17 Flat signature & 24 signatures with inscriptions.

This unread book is guaranteed to be a 1st Edition, 1st Printing. K hardback printing- Gollancz 1989. Fine book - bright boards , sharp corners and spine. Contents fine - uniquely signed , inscribed and added doodle by Terry thus; To Phil. The hi has been enclosed in a pyramid doodle. 1990 Faust Eric 1st edition Flat signed excellent condition. 1990 Moving Pictures Price clipped but without inscriptions. First Printing SIGNED by Author on title page without dedication. 1991 Reaper man First edition, first impression (Gollancz, 1991). Signed and inscribed by the author:'To Stephen, Ting! Terry Pratchett' with a drawing of a scythe. A touch of pushing to spine ends with a few very minor knocks to corners. The original and unclipped dust jacket has a little edge wear, mainly to the top; slight trace of fading to spine panel.

Signed in Terrys old style - Terry has also added a doodle of a broom. Small Gods First edition, first impression (Gollancz, 1992). Signed and inscribed by the author to the title page with an illustration:'For Justin, The Turtle Moves' Terry Pratchett'. Some compression to spine tips with a knock to top edge of lower board; some very light and occasional spotting to contents with faint staining to bottom edge. The original and unclipped dust jacket has some light edge wear, mainly to spine tips with a little spotting to bottom of front flap.

Terry has also added a doodle of a scythe. 1996 Feet of Clay Signed 1st edition with dedication, to KJ a word in your head doodle of death with scythe shelf wear to plastic wrapped jacket, page edges tanned. 1996 Hogfather 1st edition signed by author excellent overall condition. Very nice signature with a little note Go for the throat. Little mark to the pages on outside.

Some wear to corners and edges of the dust jacket and book. Light wear top/bottom spine and corners.

Signed and inscribed by Terry thus ; To Tom. 2001 The Thief of Time. Condition is Very good dust jacket is slightly crumpled.

Signed and inscribed by Terry thus : To Pat. Signed By Terry Pratchett to Jane First Edition.

The cover has some sun damage along the top and side. Signed by the author with the official signature stamp in black ink directly to title page without dedication. Jacket has a hint of patchy edge/9 shelf wear. Boards are fine with no faults.

With stamp of authenticity and hologram. 2014 Raising Steam Doubleday An Imprint Of Transworld Publishing, London, 2013. Dust Jacket Condition: As New. Signed by Terry Pratchett to the title page with the Hologram & Official Stamp.

The seller is "items-from-pastimes" and is located in Wigan. This item can be shipped to United Kingdom.