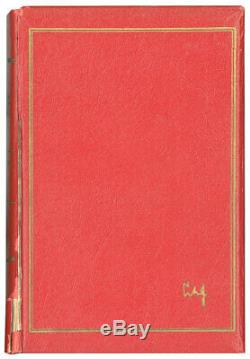 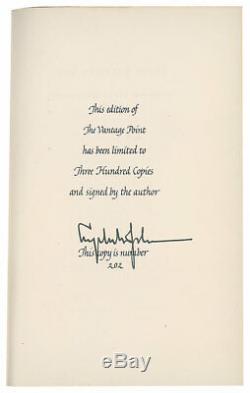 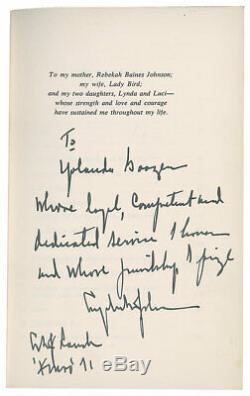 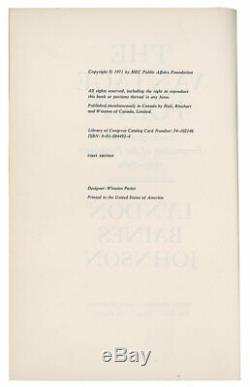 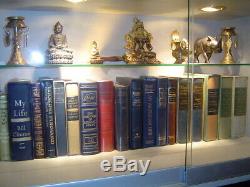 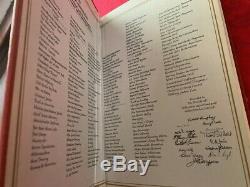 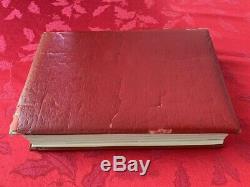 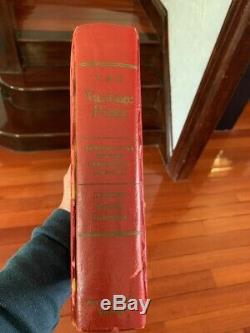 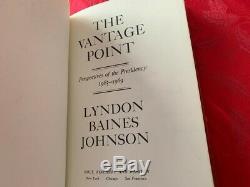 President Lyndon Baines Johnson's Autobiography. THE SIGNED LIMITED LEATHERBOUND DELUXE EDITION, LIMITED TO ONLY 300 COPIES, NON FOR SALE, ALL GIVEN AS GIFTS TO PRESIDENTS CLOSEST. MOST RARE SIGNED LIMITED AUTOBIOGRAPHY.

1 The title above says it all in summary. This is a very rare book that is signed on the book itself by President Johnson.

It is to be noted that this particular title is mostly found with the signature on a book plate which is pasted on the book. There are few trade editions which are found on the book themselves. Copy is the Deluxe Edition, produced in limited quantity. 2 Almost all presidential memoirs are released in limited deluxe editions, limited to only a few copies.

Some, like Reagans An American Life, was limited to only 2,000 copies; Clintons My Life limited to 1,500 copies; but this title by LBJ is limited to only 300 copies. It is one of the rarest presidential memoirs. Even though Fords memoirs is limited to 250 copies, 50 copies less than LBJs The Vantage Point, the LBJ limited edition is very hard to come by for the following reasons. None of the 300 copies were on sale. All of the deluxe numbered editions were used as Authors Editions which LBJ used to gift to his family members, cabinet members, politicians and friends.

The book is produced in foamed padded leather. The Autograph Collectors Magazine says that despite 300 copies produced, copies of this book rarely come in the market. Part of the reason for this may be with the poor quality of the binding. Bound in faux red leather, with foam padding, this book has not held up well since publication. Every edition encountered has significant problems, usually involving the splitting of the front covers.

When these books are found, they usually contain a wonderful inscription to a member of the Johnson inner circle. Book condition is good, with cracked joints and hinges (covers still attached by endpapers), and splits and chips to the padded faux leather cover material. LBJ was one of the greatest presidents of this country. He got so many important bills passed, such as the Civil Rights Acts and Medicare Act. His and Martin Luther King's partnership made it possible for Barack Obama to be President today.

The only thing that led to Johnson's downfall was the war in Vietnam. 5 This copy is #202 of a limited edition of 300 copies.

The book has been flatsigned by Lyndon Johnson in the limitation page as you can see from the photo. In addition, the book has been additionally inscribed and additionally signed by President Johnson, which makes it value even greater. Inscription on the dedication page in black ink, To Yolanda Boozer, whose loyal, competent and dedicated service I honor and whose friendship I prize, Lyndon B. Johnson, LBJ Ranch, Xmas'71.

Boozer served as President Johnson's personal secretary before, during, and after his years in the White House, and is recognized as the first Hispanic to serve the president in the capacity of personal secretary. She worked in the White House until 1968, and when Johnson left the presidency early in 1969, he asked her to rejoin his staff. She again served as his secretary at the LBJ Ranch in Johnson City until his death in 1973, and then as the executive secretary of the Lyndon B. A decidedly rare twice-signed limited edition. 8 Most often, signed books are valued not just by who has signed the book, but to whom the book has been inscribed to. 9 The most important books written by US Presidents are their memoirs, such as this book. As you know it was Ullyses Grant who first wrote his memoirs, but died before the book became published so there was no signed limited editions. Theodore Roosevelt then began the trend. Though his book Autobiography was not published in a signed limited deluxe edition, presidents since then have produced their memoirs in signed limited editions. Have a complete set of signed deluxe memoirs of every Presidents is great. 10 This book should complete your collection to have all available signed deluxe limited numbered editions of all of the Presidents who have produced their memoirs.

This is a rare opportunity to complete that. Serious autograph collecting has never been as popular as it is today.

Among autograph collectors, it is well known that the signature of our presidents are highly prized. Signed books by presidents is becoming very popular among collectors. When collecting presidential signed books, one can encounter some memorable rarities. This book is one of them. One of the most important thing to consider when collecting books is the content. Imagine the appeal of a letter from any American President discussing key decisions of his presidency. With a signed presidential memoir, you get all that and more. LBJ, served in all four federal elected offices of the United States: Representative, Senator, Vice President, and President.

Johnson was greatly supported by the Democratic Party and, as President, was responsible for designing the "Great Society" legislation that included laws that upheld civil rights, Public Broadcasting, Medicare, Medicaid, environmental protection, aid to education, and his attempt to help the poor in his War on Poverty. Simultaneously, he greatly escalated direct American involvement in the Vietnam War. He remains one of the most controversial presidents of all time.

By the end of his presidency, Johnson turned into a recluse, rarely leaving the White House which is why it is even rare to find books such as this signed by the President. 14 If it hadn't been for Vietnam, LBJ would have been a top 10 president. Even so, he is still highly regarded. He was listed in the Time Magazine's To 100 Greatest Personalities of the 20th Century.

The heading said that "the only legislation he couldn't pass was finding a way out of Vietnam". 15 The book focuses on a wide variety of accomplishments and events, both domestic and foreign, which shaped the Presidency of Lyndon Johnson. The reader learns of the struggles that the conflict in Vietnam presented Johnson with, and begins to develop an accute understanding for the actions he took.

In addition to the war in Vietnam, Johnson tells of the War on Poverty here in the United States. It becomes quite apparent that President Johnson was not a crooked politician, but a man of action who had the well-being of his fellow man at heart.

As a personal memoir, this account of the Johnson presidency must be taken with a grain of salt, but overall, it is an interesting firsthand account of the considerations, assumptions, and goals that guided President Johnson in his decisions. Predictably, quite a bit of space is devoted to Vietnam, but aside from his defensive justifications in foreign policy, Johnson highlights the accomplishments and triumphs that were closest to his heart, domestic achievements like his civil rights legislation, the war on poverty, etc. Overall, the reader gets an impression of Johnson as a tireless worker with good intentions who did the best he could. The book is easy to tackle, being rather concise for memoirs of a presidential term (compare with Kissinger's near 1400 pages), well-written, and interestingly personal.

The item "President Lyndon Baines Johnson LBJ Signed Limited Edition Book Vantage Point" is in sale since Saturday, March 7, 2020. This item is in the category "Collectibles\Autographs\Political\Presidential". The seller is "presidentsigned" and is located in Rego Park, New York.