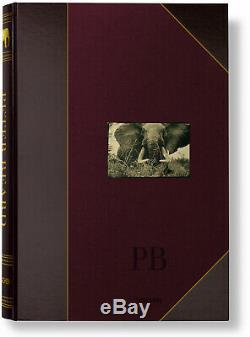 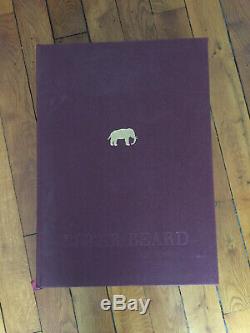 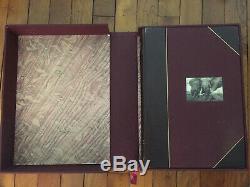 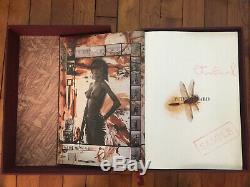 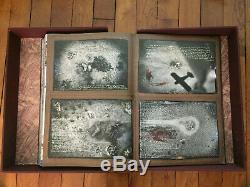 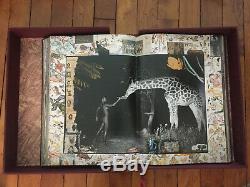 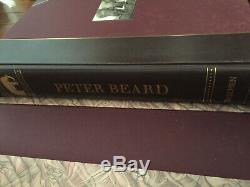 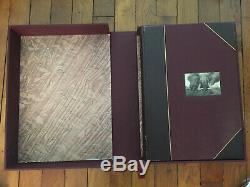 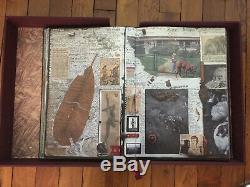 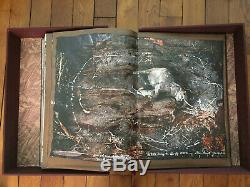 Peter Beard - Limited Edition - Rare Taschen Art Book -Signed Copy. This enormous leather-bound opus presents Peter Beard. S life and work in Kenya in all its passion, adventure, and its forthright account of ecological crisis. It includes his expansive collages, reproduced as a group for the first time , as well assmaller-scale work and revelatory spreads from his diaries , magnified to show every detail of Beards meticulous script and drawings, as well as stones, bones, and other ephemera pasted into its pages. This is an extremely rare sample/prototype for the Taschen limited Artedition. Samples were used for internal communication and international Taschen shops. While the 2250 copies weresigned by the artist with black ink and ink drops in 2006, this sample wassigned in 2007 in Paris with a red pastel, one year after the release. Unlikethe other Taschen prototypes, this one doesnt have a layer as a flyleaf.

The book comes with its original case and showswear but all the pages are present (look at the pictures). The book has been used but its still in great condition for such a rare object. With bookstand, 13.6 x 19.7 in. The most poignant are the ones of decomposing elephants where, over time, as they disintegrate, the bones form magnificent sculpturesculpture which is not just abstract form but has all the memory traces of life, despair and futility.

S photographs Photographer, collector, diarist, and writer of books Peter Beard has fashioned his life into a work of art; the illustrated diaries he kept from a young age evolved into a serious career as an artist and earned him a central position in the international art world. He was painted by Francis Bacon , painted on by Salvador Dalí.

And made diaries with Andy Warhol. He toured with Truman Capote and the Rolling Stones , created books with Jacqueline Onassis and Mick Jagger all of whom are brought to life, literally and figuratively, in his work. As a fashion photographer, he took Vogue stars like Veruschka to Africa and brought new onesmost notably Iman back to the U. His love affair with natural history and wildlife, which informs most of his work, began when he was a teenager. He had read the books of Isak Dinesen (Karen Blixen) and after spending time in Kenya and befriending the author, bought a piece of land near hers. It was the early 1960s and the big game hunters led safaris, with all the colonial elements Beard had read about in Out of Africa characterizing the open life and landscape, but the times were changing. Beard witnessed the dawn of Kenyas population explosion, which challenged finite resources and stressed animal populationsincluding the starving elephants of Tsavo, dying by the tens of thousands in a wasteland of eaten trees. So he documented what he sawwith diaries, photographs, and collages. He went against the wind in publishing unique and sometimes shockingbooks of these works. The corpses were laid bare; the facts were carefully written down sometimes in type, often by hand, occasionally with blood. Spilling out over the pages of this massive tome, Peter Beards collages are reproduced as a group for the first time at the size they have always meant to be seen, some as fold-outs.

Hundreds of smaller-scale works and diaries fill the remaining spreadsmagnified to show every detail, from Beards meticulous handwriting and old-master-inspired drawings to stones and bones and bits of animals pasted to the page. This opulent and beautifully crafted limited edition is a work of art in itself. XXL-Format: 34.5 x 50 cm 13.4 x 19.7 in. 13.6 x 19.7 in. The item "Peter Beard Limited Edition Rare Taschen Art Book Signed Copy" is in sale since Sunday, April 28, 2019.

This item is in the category "Livres, BD, revues\Non-fiction". The seller is "bleedingfreaks" and is located in Vincennes. This item can be shipped worldwide.