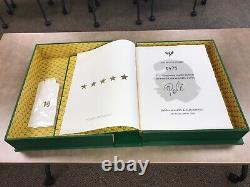 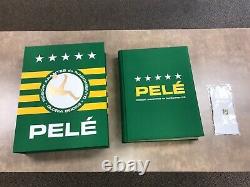 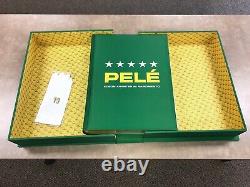 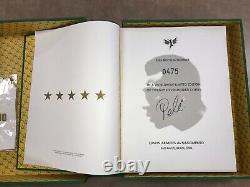 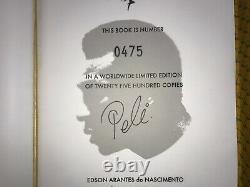 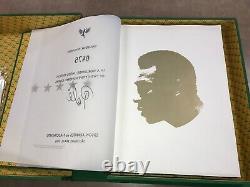 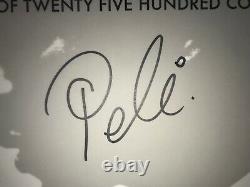 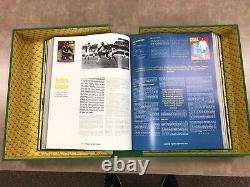 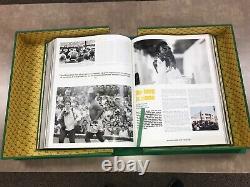 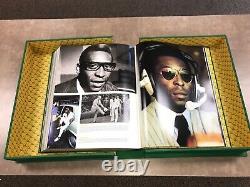 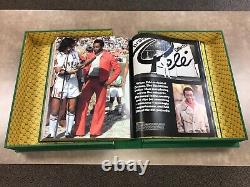 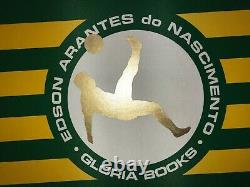 Pelé enthusiasts will immediately know how rare and unusual this item is. This is the luxury, King-Sized edition of the official autobiography by Pelé from Simon & Schuster (this version was published by Gloria Books). The text of Pelé's autobiography is accompanied by amazing photography. Each book is numbered and hand signed by Pele.

It comes in a heavy wooden box (together the box and book weigh over 35 pounds). This copy was discovered in the warehouse of a major book distributor. This book has been in storage since it was released in 2006.

Because this book was in storage for so long the glue on the tipped in page has become undone (the signed page). I have had the book repaired by a book restoration expert.

The tipped in page has been glued back into the book professionally. Please note the residue from the original glue can be seen, however their repair will ensure the page will not fall out again.

The rest of the book is in perfect condition. Because the book has been in storage for so long the inks and glues in the book have not been able to air themselves out. There was no vent to allow these gasses out of the book.

Because of this, you may notice an odor to the book. I have been ensured by experts this odor is not caused by environment, and will dissipate once the book is allowed to air out. I have been told to leave the book fanned open standing upright for a couple hours.

Worst case scenario you may have to let the book air out for a day or two. You may not even notice the odor.

Thirty years after his retirement, he is a unique global ambassador for the beautiful game and a living testament to where sporting brilliance, determination and humanity can take you. The giant, limited edition'Pelé' is a genuine piece of sporting memorabilia.

Limited to only 2,500 copies globally, each is individually numbered and personally hand-signed by Pelé. Covered and embossed in Italian fine silk and presented in ultra-large format,'Pelé' is the ultimate testament to soccer's greatest legend.

Gloria has spent two years creating the greatest ever limited edition celebration, which includes an introduction and exclusive new writings from the man himself. Pelé' is lavishly illustrated with over 1,700 images, many never previously published together with classic and newly commissioned work from some of soccer's greatest living writers. The images and text cover every key moment of Pelé's life from early childhood to the modern day. Most of the material has been collected from unseen, personal and library archives in Sao Paulo, Rio de Janiero, London, New York and Paris including rarely seen art by Andy Warhol. Pelé' was published in summer 2006 to global acclaim.

It has been described by the Daily Telegraph in the UK as'the most comprehensive book on [soccer] football there has ever been'. Sports Illustrated said'Every page presents a new treasure'.