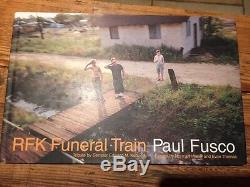 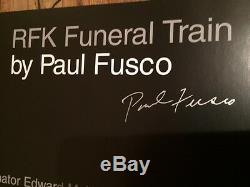 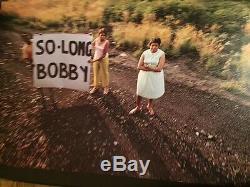 Signed First Edition, Hard Cover with dust Jacket , Excellent condition. On June 8, 1968, Robert Kennedy's coffin was put on a train 20 cars long in New York and taken slowly to Washington, D. For burial in the Arlington Memorial Cemetery. Paul Fusco, then a staff photographer for Look, was on that train, and the pictures he took of people who lined the tracks along the way fill this moving book. These emotional photographs, many never-before-seen, remember the urgency and tragedy of Bobby Kennedy's assassination and the moving farewell from hundreds of thousands of people who stood patiently in the searing heat along roadsides down the east coast to watch his funeral train pass slowly by just as Abraham Lincoln's had 103 years before.

The item "Paul Fusco RFK Funeral Train, Signed Book First edition 2000" is in sale since Monday, March 20, 2017. This item is in the category "Books\Antiquarian & Collectible".

The seller is "intertrade16" and is located in York. This item can be shipped worldwide.