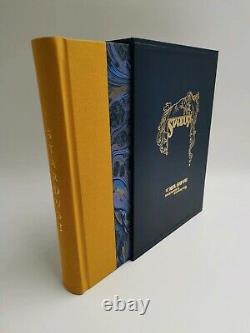 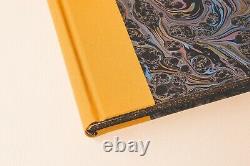 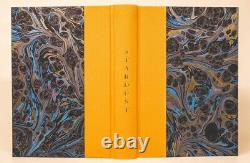 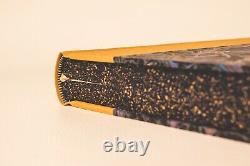 Neil Gaiman / Charles Vess Stardust Lyras Books Limited Edition Mustard. This is one of 250 numbered mustard copies quart-bound with mustard-colored cloth and a handmade marbled cover board. Published in November 2020 from Lyra's Books U. , the Standard Edition was limited to 500 numbered copies, signed by the artist, Charles Vess. Of the 500, 250 were bound in "Standard Mustard" and 250 in Standard Blue.

With a new introduction written especially for this edition by Charles Vess, and the inclusion of nine color plates, of which three are brand new. Gaiman says it is probably the nicest custom printing of any of his works. Richard Tong of Lyras Books says: The design of this special, limited edition of Stardust has been heavily influenced by the books of the Golden Age of Illustration from the early part of the 20th century. These were the days of book illustration giants such as Arthur Rackham, Kay Nielsen and Edmund Dulac who were illustrating the Brothers Grimm, Aesops Fables and other fairytale classics. The magical story by Neil Gaiman, and the gorgeous illustrations of Charles Vess are a perfect fit, just as Kay Nielsen was a perfect fit with East of the Sun, West of the Moon, or Edmund Dulac with The Rubaiyat of Omar Khayyam.

My attempt with this special edition is to put the text and art into a format which I believe is fitting for the style of book and the style of painting. The page layout is very similar to those Golden Age books, with extra-large margins and a compact text block. The illustrations in two of these editions are tipped on plates with tissue guards, just as was so often the case with Rackham et al. Occasionally, especially in the later trade editions, they did not have tipped on plates and were instead printed directly to the page.

Those pages were then hand tipped into the book.... The only real change I have made is to omit a frontispiece. The reason for this is that Charles Vess provided us with the most beautiful, full colour title page and the book simply does not need another image on the facing page. It would be too much.

Instead, that additional image has been moved inside with the rest. There will be nine wonderful, full colour illustrations by Charles in this illustrated edition of Stardust plus the title page.

Three of these illustrations are new, the other six are older but did not appear in the original DC edition. Charles has also written a new foreword for this edition. My wifes making me sell this. The item "Neil Gaiman Stardust Lyras Books Artist Signed Limited Edition Mustard Sold Out" is in sale since Tuesday, December 15, 2020.

This item is in the category "Books\Antiquarian & Collectible". The seller is "abardchey" and is located in Santa Barbara, California.