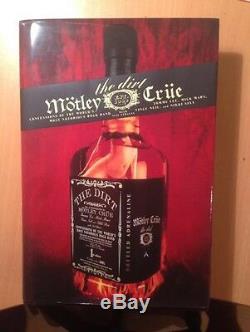 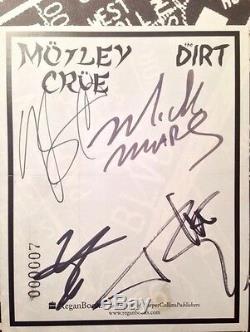 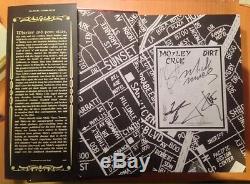 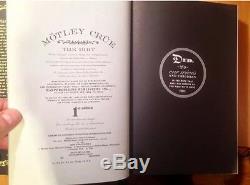 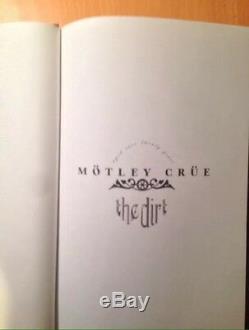 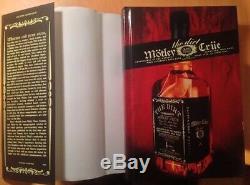 SUPER RARE - "THE DIRT" is a 1st EDITION book Signed MOTLEY CRUE. Limited edition sticker plate 000007 Book is signed by Nikki Sixx, Tommy Lee, Vince Neil & Mick Mars. Book is in LIKE NEW CONDITION, autographed page is in perfect condition. The Dirt: An autobiography of the World's Most Notorious Rock Band is a collaborative autobiography written by Mötley Crüe, Neil Strauss, and the "Mötley" managers, where they write about the members of Mötley Crüe. First published in 2001, it chronicles the formation of the band, their rise to fame and their decadent lifestyles.

They write of the highs and lows of their lives with rare candor. The Dirt was written by Tommy Lee, Mick Mars, Vince Neil and Nikki Sixx, with the aid of New York Times writer Neil Strauss, and contains chapters written by brief bandmember John Corabi and former band manager Doc McGhee. Music executives such as co-manager Doug Thaler, Tom Zutaut, and Mike Amata also make short contributions in which they present their versions of events. The book contains over 100 photographs, mostly black and white, with a 16-page color section in the middle of the book. The Mötley Crüe album Saints of Los Angeles released in 2008 is the soundtrack to the book.

The item "Mötley Crüe THE DIRT 1st EDITION Signed Book" is in sale since Sunday, February 5, 2017. This item is in the category "Books, Magazines\Antiquarian & Collectable". The seller is "lgellis68" and is located in North Beach. This item can be shipped worldwide.