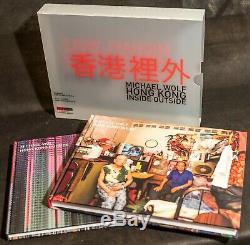 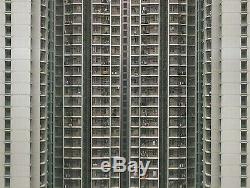 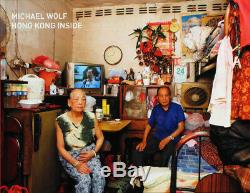 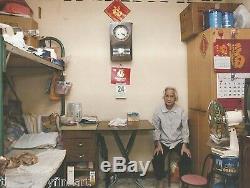 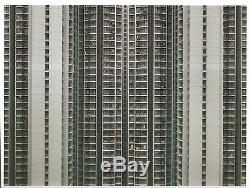 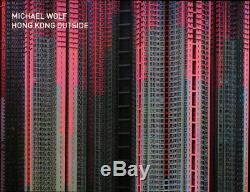 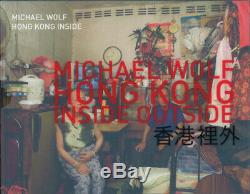 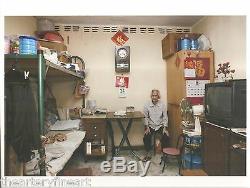 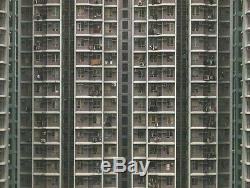 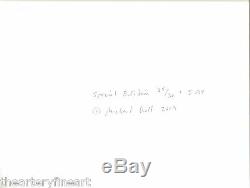 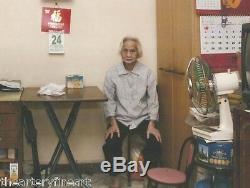 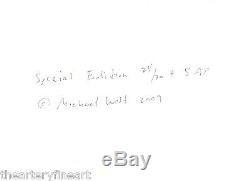 Color photographs, one for each volume. (9" x 11-1/4" sheet, 7-1/4" x 10-3/4" image) and. (9" x 11-1/4" sheet and image). Slipcase Dimensions: 9-3/4" x 12-1/4" x 1-3/4. During his more than 14 years in Hong Kong, German-born photographer Michael Wolf's perspective on his adopted city has boiled down to an essence of density the hemmed-in, closely built environment which shapes everything from its peoples' lifestyles to their outlooks and even dreams. Wolf collects the works of his two previous collections. Into a two-volume set focusing on the visual elements of one of the world's most crowded cities. Wolf's photographic technique removed any sky or horizon line from his depictions of Hong Kong buildings, flattening his subjects until they become relentless abstractions of urban expansion. It is a disorienting vantage point, which perhaps is the spatial experience of Hong Kong's inhabitants. Wolf went deeper, taking portraits of public housing residents surrounded by all their belongings. He obtains the same vantage point for each picture forming a typology that allows the viewer to study how these individuals make their confined spaces their own. Chicago, like many urban centers throughout the world, has recently undergone a surge of new construction, grafting a new layer of architectural experimentation onto those of past eras. In early 2007, the Museum of Contemporary Photography with the support of U.

Equities Realty, invited Michael Wolf as an artist-in-residence. Bringing his unique perspective on changing urban environments to a city renowned for its architectural legacy, Wolf chose to photograph the central downtown area, focusing specifically on issues of voyeurism and the contemporary urban landscape in flux. This is Wolf's first body of work to address an American city. Whereas prior series have juxtaposed humanizing details within the surrounding geometry of the urban landscape, in The Transparent City , his details are fragments of life -- digitally distorted and hyper-enlarged -- snatched surreptitiously via telephoto lenses: Edward Hopper meets Blade Runner. The material resonates with all the formalism of the constructed, architectonic work for which Wolf is well-known, but also emphasizes the conceptual underpinnings of his ongoing engagement with the idea of how modern life unfolds within the framework of the ever-growing contemporary city.

Michael Wolf grew up in the United States, and studied at UC Berkeley and with Otto Steinert at the University of Essen in Germany. Two previous books -- Sitting in China (2002) and Hong Kong, Front Door/Back Door (2005) -- feature his much acclaimed photographs of China. Wolf is the recipient of the 2005 World Press Photo Award and the American Photography Award.

The item "MICHAEL WOLF Hong Kong Inside/Outside 2 SIGNED Photos with DELUXE Edition Book" is in sale since Tuesday, May 24, 2016. This item is in the category "Art\Art Photographs".

The seller is "thearteryfineart" and is located in Boston, Massachusetts. This item can be shipped worldwide.