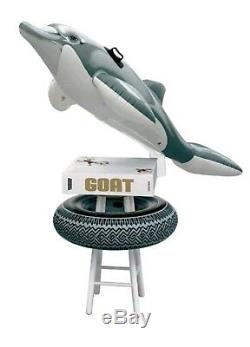 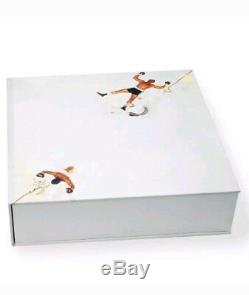 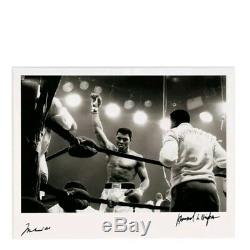 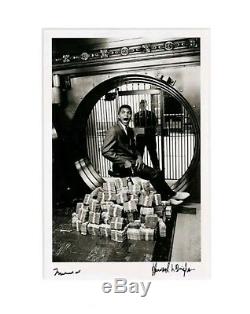 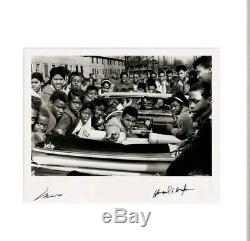 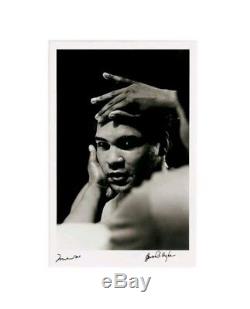 I therefore do not know the items number out of the 1000 produced. The photos supplied are obviously not of the item for sale as it is still wrapped as previously stated. They are generic photos from the internet.

Comes with BONUS promotional booklet. This book is a limited edition preliminary insight to the launch in 2001, of G. This book contains 59 pages of exhilarating action and rarely seen before, personal images of the great man himself. Feel free to contact for any more details PRODUCT DESCRIPTIONS Muhammad Ali is one of the most remarkable personalities of our time and the greatest sportsman ever to walk the earth.

To honor this living legend, TASCHEN has created a work that is epic in scale and as unique and vibrant as the man himself. A worthy tribute to his life should reflect the scale of his achievements, and GOAT GREATEST OF ALL TIME is fully up to that task: The Champs Edition: No. 1 - 1,000 The "Champs Edition" has a white silk cover with pink lettering. Limited to 1,000 individually numbered copies, each one signed by Muhammad Ali and Jeff Koons. Four gallery-quality silver gelatin prints signed by photographer Howard L.

Bingham and Muhammad Ali Every "Champs Edition" comes with the sculpture "Radial Champs" by Jeff Koons. Size 175 x 170 cm, 69 x 67 in. Comprising of 2 inflatables and a stool. Over 3,000 images - photographs, art and memorabilia, much of it published for the first time - from over 150 photographers and artists. Original essays and the best interviews and writing on the Champ of the last five decades, from hundreds of writers, totaling 600,000 words.

XXL-format: 792 pages, including two gatefold sequences measuring 200 x 50 cm 80 x 20 in. And nine gold-metallic double-page spreads printed in silkscreen, open each chapter. Measuring 50 x 50 cm 20 x 20 in. , GOAT tips the scales at 34 kgs (75 lbs). Each copy comes in a silk-covered box illustrated with Neil Leifers iconic 1966 photo, Ali vs Williams. Bound by the official bindery for the Vatican, in pink leather, the color of Alis first Cadillac. The bindery, specializing in the most elaborate and oversized editions of the Bible and the Koran, enforces the strictest standards of quality control and only several hundred copies can be assembled per week.

Utilizing state-of-the-art digital technology, no expense has been spared to restore the original photographic materials to the highest possible standards. The results of this effort create unparalleled intensity and range in the colors, and exquisite tone and density within the duotone images.

Eight-color printing on Galaxi Keramik 200 gsm semi-matte paper with gloss varnish on all images. Champ's Edition Hardcover in clamshell box with 4 prints and sculpture, 19.7 x 19.7 in. A worthy tribute to his life should reflect the scale of his achievements, and GOAT - GREATEST OF ALL TIME is fully up to that task. Four years in the making, and the most comprehensive study of Ali to date, GOAT tips the scales at 34 kgs (75 lbs) and is 50 cm x 50 cm (20" x 20") in size.

Nearly 800 pages of archival and original photographs, graphic artwork, articles and essays - many of them previously unpublished - chronicle six decades of his life in stunning detail. To cap it all, the project takes place with the participation of Ali himself and those members of his inner circle who have been closest to him over the years: from managers and key cornermen to friends, family and children; from spiritual and other advisers to broadcasters, essayists and journalists. Motivating this endeavor is the conviction that Ali is not just a figure from the past, but one whose influence even today pervades everyday popular culture.

The merest glance at the world of sports and music, for example, reveals his psychic DNA on everything from the lyrics and style of rap music to the way sports figures represent themselves. More significantly, his actions outside of the boxing ring still speak even louder than the verbal outrageousness of his pre-fight spectacles. He is a man who stood by his convictions, and took a highly unpopular stance at the peak of his career in a country not yet ready for radical change. He risked everything - his title, his livelihood, and his status - and in the process emerged as a man of principle and indeed, a hero for all time. No stone has been left unturned in telling this remarkable story: the book features written contributions from hundreds of writers and photographers, as well as over 3,000 photographs of Alis dazzling life.

Plus Alis own insights, writings and drawings, and reproductions of fight posters and classic memorabilia. After the enormous success of Helmut Newtons megabook, SUMO, publisher Benedikt Taschen felt that his next challenge lay not only in creating a work that had multiple sources and extraordinary photography, but one where the emphasis on the written word, narrative and research would be on par with that of the most comprehensive literary biographies. In short, matching meticulously crafted prose with incredible color and black-and-white photography. In addition, new work - commissioned from artist Jeff Koons - gives the Ali mythology a 21st-century edge and an entirely contemporary context. GOAT comes in two versions.

Every Collectors Edition comes with the photo-litho Radial Champs by Jeff Koons in the size 50 x 50 cm (20" x 16"). All 10,000 copies are individually signed by Muhammad Ali and Jeff Koons. Every production detail has been meticulously managed as have the launch activities for the book itself - starting with the Frankfurt Book Fair, where two six-meter (20-foot) billboards showing powerful Neil Leifer images of Ali sat at the center of an enormous exhibition area.

Beyond this a boxing ring and seating space replicated the exact décor, ambience and lighting of the famous Cassius Clay vs Sonny Liston title clash of February 25, 1964, when the 22-year-old Ali won his first heavyweight title. Further international launches, including Art Basel Miami Beach in December 2003, will take the unique experience to audiences everywhere. But why the enormous investment (of over 10 million Euros) on a project about Ali, especially after weve read all the books, seen the movies, watched some of the great documentaries and, after all these years, grown familiar with his story? Benedikt Taschen says, We wanted to turn the logic of a conventional biography on its head. In this book, we lead from the photography, but even through the detailed narrative captions, we draw the reader into the written story and the texts.

The end result is a structured narrative thats like the most richly detailed screenplay you can imagine. You could make a film straight from the book.

And so the result is an experience that works on many levels, depending upon your mood, sensibilities and even the time available to you to taste the riches in this amazing monument. Limited to 10,000 individually numbered copies, each one personally signed by Muhammad Ali and Jeff Koons. Original essays and the best interviews and writings on the Champ of the last five decades, from hundreds of writers, totaling nearly 600,000 words. XXL Format: 792 pages, including two gatefold sequences measuring 200 cm x 50 cm (80" x 20") and nine gold-metallic double-page spreads printed in silkscreen, opening each chapter. Measuring 50 cm x 50 cm (20" x 20"), GOAT tips the scales at 34 kgs (75 lbs).

The bindery specializing in the most elaborate and oversized editions of the Koran and the Bible enforces the strictest standards of quality control and only several hundred copies can be assembled per week. Bingham has lived in Los Angeles since the age of four. He has worked and studied there, and most importantly perhaps, met his lifelong friend Muhammad Ali there, in 1962. He had no idea who the emerging fighter was when he was assigned by the Los Angeles Sentinel to photograph the young Cassius Clay (Ali still reminds him of this oversight 40 years later). Since then, Bingham has become a highly-respected portrait and reportage photographer, honored with awards in the United States and with his work gracing magazines likeSports Illustrated, Newsweek, Time and People.

His work has been exhibited internationally, but he remains best known for his extraordinary body of work capturing, at close quarters, the many faces of Muhammad Ali. The most powerful expression of this came in his acclaimed 1991 book, Muhammad Ali: A Thirty-Year Journey. He is Principal Photographer and Editorial Consultant of GOAT.

Jeff Koons We are proud to have Jeff Koons create his own tribute to Muhammad Ali as part of the Champs Edition of GOAT. Koons, 48, is one of the most influential living artists and an icon of the modern art world. He started his meteoric rise in the 1980s as part of a generation of artists who explored the meaning of art in a media-saturated age. With his stated intention to communicate with the masses, Koons draws from the visual language of mass media and advertising, and the entertainment industry. Testing the limits between high and low culture, his sculptural menagerie includes Plexiglas-encased Hoover vacuum cleaners, basketballs floating in glass aquariums, and porcelain homages to Michael Jackson and the Pink Panther.

Koons frequent goal is to present the common object as is. When Im working with an object I always have to give the greatest consideration not to alter the object physically or even psychologically. I try to reveal a certain aspect of the objects personality. Im placing the object in a context or material which will enhance a specific personality trait within the object. Koons has been the subject of numerous solo exhibitions at the San Francisco Museum of Modern Art, the Bilbao Guggenheim, the Stedelijk Museum in Amsterdam, the Staatsgalerie Stuttgart and the Museum of Contemporary Art in Chicago among others. I wanted to do something without being illustrative.

I wanted it to show inclusion, transformation and grace. The item "GOAT Muhammad Ali Champ's Edition limited edition Book Taschen plus bonus gift" is in sale since Saturday, November 3, 2018. This item is in the category "Books, Magazines\Antiquarian & Collectable". The seller is "rosst73" and is located in Rochedale South, QLD.