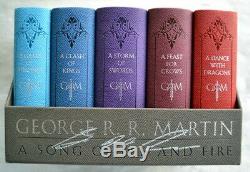 Books One - Five of A Song of Ice and Fire. A Beautiful, Rare Gift Idea! - for a friend - or just for yourself!

Personally signed by George R. Martin directly on the box front. Books are in Brand New Condition and Unread. Tight and Square, opened only to be signed. No dust jackets as issued.

A GORGEOUS SET OF THESE SCARCE BOOKS!!! A Must Have For Any George R.

An immersive entertainment experience unlike any other, A Song of Ice and Fire has earned George R. Martindubbed the American Tolkien by Time magazineinternational acclaim and millions of loyal readers. Now the monumental saga gets the royal treatment it deserves, with each book wrapped in bound leather-cloth covers and packaged together in an elegant display case.

This one-of-a-kind boxed set includes. One of the best series in the history of fantasy. Such is the stern motto of House Stark, the northernmost of the fiefdoms that owe allegiance to King Robert Baratheon in far-off Kings Landing. There Eddard Stark of Winterfell rules in Roberts name. There his family dwells in peace and comfort: his proud wife, Catelyn; his sons Robb, Brandon, and Rickon; his daughters Sansa and Arya; and his bastard son, Jon Snow. Far to the north, behind the towering Wall, lie savage Wildings and worseunnatural things relegated to myth during the centuries-long summer, but proving all too real and all too deadly in the turning of the season. Yet a more immediate threat lurks to the south, where Jon Arryn, the Hand of the King, has died under mysterious circumstances. Now Robert is riding north to Winterfell, bringing his queen, the lovely but cold Cersei, his son, the cruel, vainglorious Prince Joffrey, and the queens brothers Jaime and Tyrion of the powerful and wealthy House Lannisterthe first a swordsman without equal, the second a dwarf whose stunted stature belies a brilliant mind. All are heading for Winterfell and a fateful encounter that will change the course of kingdoms. A literary dervish, enthralled by complicated characters and vivid language, and bursting with the wild vision of the very best tale tellers. Martin and A Song of Ice and Fire. The only fantasy series Id put on a level with J.

Tolkiens The Lord of the Rings. Its a fantasy series for hip, smart people, even those who dont read fantasy.

Martin amply fulfills the first volumes promise and continues what seems destined to be one of the best fantasy series ever written. On A Clash of Kings. Martin has producedis producing, since the series isnt overthe great fantasy epic of our era. Its an epic for a more profane, more jaded, more ambivalent age than the one Tolkien lived in. Martin has created the unlikely genre of the realpolitik fantasy novel. On A Feast for Crows.

Epic fantasy as it should be written: passionate, compelling, convincingly detailed and thoroughly imagined. On A Dance with Dragons. I always expect the best from George R. Martin, and he always delivers.

He spent ten years in Hollywood as a writer-producer, working on The Twilight Zone, Beauty and the Beast, and various feature films and television pilots that were never made. He has been in the Seven Kingdoms ever since. Please Check out my other items. PLEASE NOTE: WE HAVE SEVERAL SIGNED COPIES OF THIS SET, AND THE SIGNATURES YOU RECEIVE MAY VARY SLIGHTLY FROM THE ONES PICTURED. International rates may be higher depending on destination.

All books are padded securely in bubble wrap and boxed to prevent damage. All items must be paid for within 5 days or will be re-listed. The item "George RR MartinSIGNEDA Song of Fire and Ice5-Book Leather Set1st Edition" is in sale since Sunday, June 30, 2019. This item is in the category "Books\Fiction & Literature". The seller is "nomoredayjob" and is located in San Francisco, California. This item can be shipped worldwide.