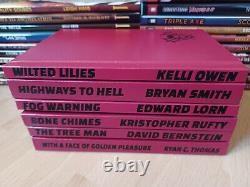 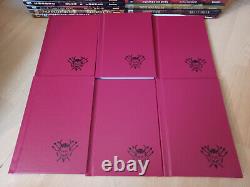 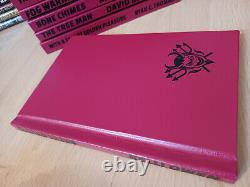 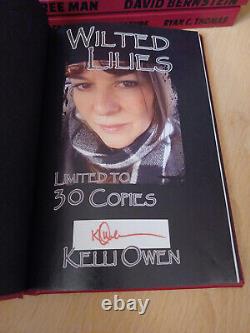 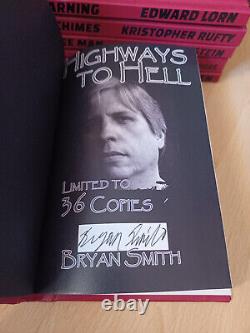 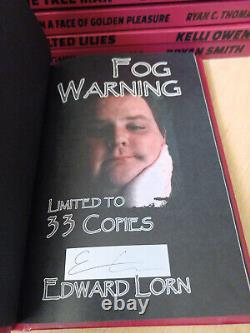 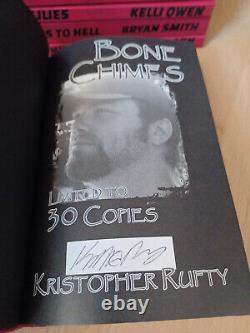 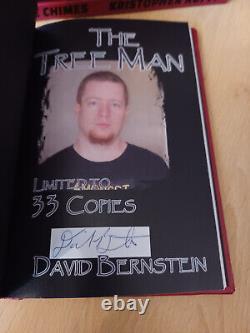 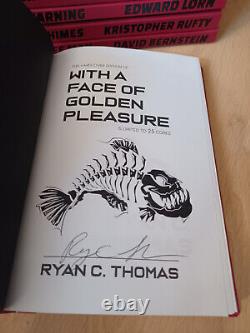 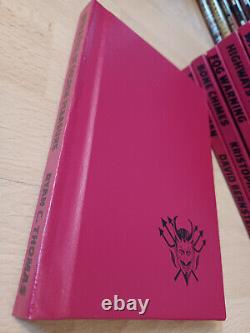 MINT condition, brand new and unread Hardcover Editions. Each book is SIGNED by the author and Limited to just 36 copies or less, please see the listing below for the exact Limitation per book or it's also visible in the pictures for this listing. WILTED LILIES by Kelli Owen (Limited to 30 Copies).

It's not that Lily May Holloway is a broken, battered teenager recently escaped from her kidnapper. It's not that she may or may not have killed him to escape. The question on Detective Travis Butler's mind is -- what exactly does the death of little Tommy Jenkins have to do with her kidnapper?

And why does the man behind the one-way glass want the detective to entertain Lily's tales of speaking to the dead... And being able to hear the thoughts of the living?

HIGHWAYS TO HELL by Bryan Smith (Limited to 36 copies). The road to hell is paved with angels and demons. Brain worms and dead prostitutes.

Serial killers and frustrated writers. Zombies and Rock'n Roll. And once you start down this path, there is no going back. Collecting thirteen tales of shock and terror from Bryan Smith, Highways to Hell is a non-stop road-trip of cruelty, pain, and death.

Time's slipping away, Doc... Emergency Room Physician Brent Cummings is harboring secrets he'd rather leave in the shadows of his past.

But, when he finds a dead woman in a foggy park, all his skeletons come tumbling out of the closet. In a deadly race against time, Brent attempts to alter the future so that he might finally let go of the past.

Will he heed the warning in the fog, or will fate prove more dependable than the good doctor? BONE CHIMES by Kristopher Rufty (Limited to 30 copies). A community where the mortgage is paid with blood. A man with an unhealthy devotion to his couch.

A death machine that kills whoever its owner wants. A woman escapes one nightmare to find herself in another living hell. A boy learns more about his father than he ever wanted to know. Bone Chimes, the first collection from Kristopher Rufty, features nine demented tales, including The Night Everything Changed, the prelude to The Lurkers. Table Of Content: Author's Note The Chomper Love Seat Something's Out There?

Women and children have been mysteriously disappearing from Evan's town. And now Evan may know why. He was climbing a tree in the woods when he saw a decrepit old man toss a helpless woman into the mouth of a hideous tree-like creature. Evan knows he can't stop the man and the creature by himself, but he also knows no one will believe a kid with such a wild story. Only his best friend, Peter, can help him confront this terrifying evil.

But if they aren't careful, they will soon be missing too. WITH A FACE OF GOLDEN PLEASE by Ryan C. Thomas (Limited to 25 copies).

The Earth's water is suddenly disappearing. All of it gone in days, without any explanation. People are scared, lost and thirsty, knowing they only have days left to survive. It's up to Cameron, a Southern California slacker, to save his estranged wife and child during one of the strangest apocalyptic scenarios of all time, and see if he can solve the mystery of why the most important life-sustaining element on the planet has vanished like a magic trick. This item is in the category "Books, Comics & Magazines\Books".

The seller is "jizzlefinger" and is located in this country: GB. This item can be shipped worldwide.